In January 2010 Patrick and Simone (me) acquired a handsome dutch barge after selling our much loved canal boat Pennie.  The new boat is on the river and has big windows with beautiful views.  Buying the boat was a stressful thing, we had started looking at bigger boats in June 2009 and saw many we didn’t like, one we loved but couldn’t afford and then the one we now own- which we kind of loved but which smelt weird and had very bad curtains.

We put in an offer and it was accepted and then we had to deal with the separate issue of the mooring and securing that. Oh, and then of course we had to sell our old boat and get a ‘marine mortgage’ for the new one which involved lots of form filling, a lovely broker who helped us a lot (www.londontideway.com) and a nice long chat with the owner of the finance company about how we (me and Pat, not me and the man on the phone) would one day sail to france (but that’s a long story).

The major part of the sale process was having the survey done.  This happened in late November and was expensive and eye-opening.  The first major discovery was that the tanks underneath the main living space were horribly rotten and rusty.  So there was water leaking down into the bilges (that’s the bottom of the boat (the hull) on the inside).  And of course this is a terrible thing for a boat.  And it’s also nasty because the leaking stuff can be water, black water, diesel and all of that gets mixed with rust and makes this beautiful orange coloured goo- which you can see pictures of in earlier posts.  As well as that the survey outlined lots of other possible problems with the engine, electrics, plumbing and, in general, everything really.  The good news however was that it had been fitted out to a high standard and had a very good hull, which had been overplated so it was hopefully not going to sink anytime soon. Fingers crossed.

PHASE ONE- removing the tanks and cleaning the bilge

The first phase of the renovation process is getting the tanks out, cleaning the horrid bilge and painting over it with rust converter.  This is a big horrible job that many people will not do.  You do it for love or money- but in some cases even money isn’t enough.  We thought at first this might take months and months, but got good advice from various people and slowly slowly got cleaning. 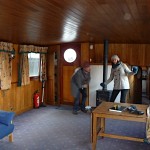 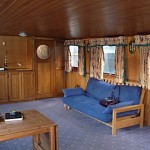 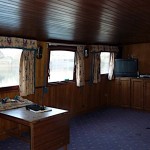 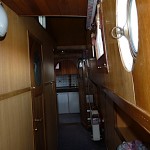 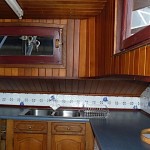 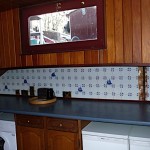 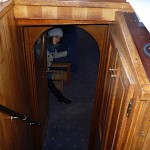 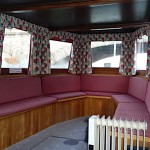 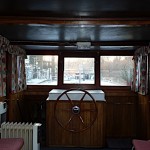 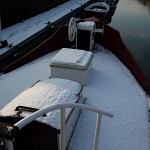 The boat is designed all the wrong way round because in the 80’s it was converted for use as a conference venue (what wasn’t?).  As a result the kitchen is where the bedroom should be, there are two toilets for ladies and gentlemen, the bedroom is where a bar once was and there’s loads of ‘general’ space  (a big wheel house and living room) where, in Seahorse’s conference venue heyday, it was all motivational speakers and powerpoint presentations.

So the plan is to get some serious space advice from  talented ‘design-space-living-guru’ Nick Radclyffe (also my dad) and a highly recommended boat fitter called Tom who will do the fit-out.  This involves cutting through a couple of steel bulkheads (these are walls but serve no structural purpose) to knock through the front cabin which you can only access from outside at the moment.  Then it will be a  bedroom which is connected to the rest of the boat, and all nice and curvy.  All of this work needs careful planning and you have insulate properly and use special bendy wood and stuff like that. I think.  And also there’s things like putting down nice floorboards throughout and knocking down dodgy walls so its not like a series of boxes.

This phase is too far away to even imagine and will probably involve Pat and I spending every waking moment sanding and painting and trying to convince our friends to help.  But as you can see from the photo’s above, it is in need of some aesthetic attention.  So lots of painting things white and avoiding ikea/homebase at all costs.  In theory.