Today the boat is making a lot of noise.  It creeks and whinges and then there are loud crashes above my head.  When it’s windy and the tide is high, the boat sways incessantly.  When other boats go past they create huge waves and it feels like you are on a voyage of discovery. And then one becomes rather tired in a nice way.  So trying to work in the afternoon is an exercise in staying awake really.  More than anything else.  Anyhooo.  I felt I should write to discuss progress.

The main progress relates to the stove in the front room.  I called ‘Woodwarm’, who are the only people we can find to make a double sided stove in a vaguely reasonable way (one which doesn’t look like a designer crematorium for small creatures) and went through our requirements.  Bear in mind that we have spent around 3 months researching stoves and have not found the optimum, and then finally decided to go for this one. So, I had a conversation with the stove man that went a bit like this:

….’blah blah 9kw stove, multifuel, delivery address is xxxx, and that’ll be how much please?’ (me)

…’Hmmm. Hold on a sec, I’ll check for you’… pad pad pad… ‘I make that one thousand, six hundred pounds including VAT. Do you want to put that through now?’. (stove man)

…’How are you planning to get it in the house?

‘It’s fine, we’ve got a cast iron bath in here, and we had to make a hole in the roof for that. This isn’t as big as a cast iron bath.  Surely you sell lots of stoves to boat dwellers??’.

Anyway, to cut a long and mostly boring, (so I don’t know why I felt the need to recreate it word for word above) conversation short, it turned out that the stove was practically as big a a cast iron bath and rather larger than we realised.  This panicked me terribly, so in order to really get to grips with it’s size I decided to recreate it in a Michel Gondry sort of style.  This way, we would be able to see just how large it was.  And also it kept me occupied in an arts and craft way for most of the afternoon.  This is what it looked like: 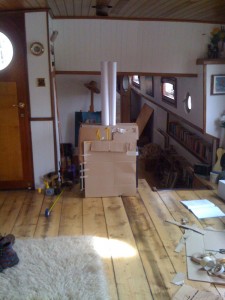 I think it is ridiculous, so I didn’t order it.  It might look a reasonable size in the picture but believe me it is not appropriate.  It is effectively a furnace, suitable only for industrial purposes.  So now we are looking again at alternatives.

Meanwhile we also have bought an induction cooker, to cook with, for the kitchen.  It might be faddy, but it means we don’t have to have gas on the roof.  Instead we can have seagulls and herons!  Apparently the Japanese love induction cookers- so there are lots of demonstrations online about how you can cook with them.  This is all for now.