We have it.  In two places. One big, one small.  I now remember how very important stoves on boats are.  It’s probably one of the top reasons to live on a boat.  Maybe the combination of flames next to water.  Something about the elements, and the reflections, and the fact that they kind of cycle around each other. 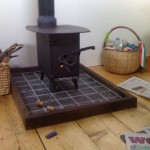 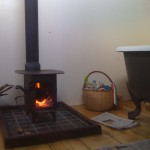 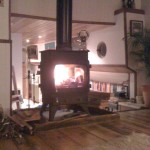 Currently we are most in love with Louis, which is the small stove made by a lovely burner-maker in devon called ‘Windy Smithy’.  Louis sits next to the bath and he is so wonderful, with much character and a wide hat.  I know where I am with Louis, because he is modest, and simple.  The big burner, double sided and all jazz hands in the front room, I am still a bit suspicious of.  I think I will grow to love him when he is less shiny and new. In fact he’s already a bit better since getting grubby on the inside windows.

At the moment I am very busy with work, so I feel far from the boat world.  It’s making it hard to write anything sensible, because I’m all space-less…. And the whole point is that boats give space.  So maybe I’m a bit grumpy about that. (It’s my own fault!)

Sorry about the pics- they are awful, but I’m just in the process of loading proper software onto my computer so I can upload so NICE photos taken on a NICE camera. 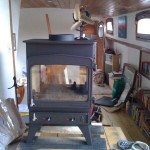 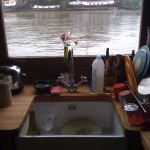 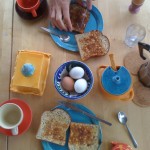 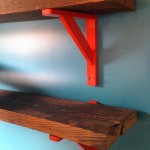 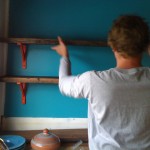 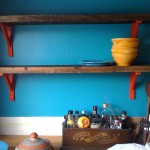 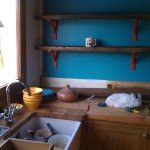 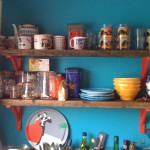 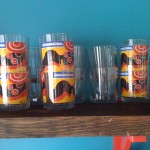 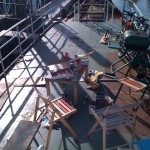 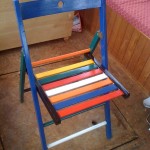 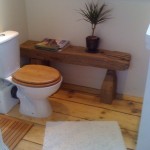 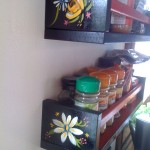 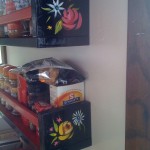 So, we’ve nearly done the kitchen, the woodburner has arrived and basically, our list of things to do has thoroughly decreased.  It’s a strange sort of feeling really.  However.  There are still installations to be done.  The pipes for the burners need to be bought and this is proving difficult and expensive- because our big woodburner is so big it needs a 7inch diameter flue, and quite a long one.  Pat is dealing with this.  That’s the burner above.  It’s good, I think, and not as big as it appears to look in that picture.  It’s going be really great once it’s actually burning something. Until then it’s sort of hard to know.

The most exciting thing is that we have been doing arts and crafts.  It all started with the shelves.  Pat made them out of old oak which we had acquired and I had a vision about the brackets.  “RED!” I said, out loud.  Not just any red though- it was to be a very specific red so that it would not clash with the turquoise wall behind.  So I mixed a red, which to the naked eye maybe just looks like red, but I know it’s not just any red.  And BINGO BONGO- we made the best shelves I have ever had.  They may not be much to anyone else, but all things considered, they may well be one of the best things I have ever contributed to. (Which says a lot about the rest of my out-put.)  The shelves have since been ‘styled’ with our newly acquired Orangina glasses (Chiswick car-boot sale £5) and mum’s lovely bowls and plates. (Also featured in the ‘breakfast’ photo above) (Where are my invitations to Guardian LIFESTYLE supplement??? Like HELLO??)

So, after the shelves, one thing led to another and before I knew it I was all over our old ikea slatted chairs that everyone in the western hemisphere owns, or has owned, at some stage.  They have been painted in stripes- and I am quite pleased with the result. (See above).  Pat then made a spectacular bathroom shelf out of a piece of drift wood which he dragged out of the river at low-tide the other day. It looks a bit like the flintstones.  We have decided to leave the wood in its rustic state, although this means there are one or two animals living in it.  Perhaps not such a bad thing, considering we now have a mini-fly infestation, and maybe the creatures living in the stonehenge shelf will eat the flies.  (I say infestation, but it’s not that bad really).  I thought they were fruit-flies but boat-fitter Tom believes they may be coming from the plughole, out from the river and into our home. Which is both rude and irritating- because they especially like wine, so they have baths in ours.

A large vessel just went past and now there seems to be a lot of watery bubble noise under the boat- this happens a lot, but I’m suddenly feeling a bit worried that maybe some went in the holes where the sink water goes out (like the flies do). I don’t know if that’s possible… It probably isn’t is it? No.

Crafts.  Yes- I have also painted some ‘roses and castles’ style roses onto some cheapy spice racks to jazz them up a bit.  That was a Saturday afternoon well spent. And Pat baked a giant stuffed marrow for dinner that night, which isn’t quite arts and crafts but was still quite impressive.