So 4 have been welded into the front- they are not as big as we thought they’d be but they are at a great height so you can look out and see many reflections on the water.   Obviously the window bit hasn’t been put in- but that’s going to be done this week.  Also, I include some pictures of the open plan nature of the messy rest of boat.  It is nice isn’t it? Well, not nice, so much, more a complete building site- but nice if you ignore the messy bits and focus on the shape.  Tom has built himself a table to work on, but until Stuart the squatting welder goes he’s sort of waiting to get going.  Pat thinks Stuart’s done a really great job on all the steel bits.  To be honest, it’s not really my area of expertise so I shouldn’t like to comment, but it all looks very good to me.  Its satisfying to see the horrid old bits get chopped out and new straighter bits put in.  And that’s as far as my assessment capability on the whole thing goes.

We have changed our minds again about the stove for the bedroom and are thinking of keeping the Louis stove after all.  As it looks smaller than I remembered.  And we put it next to the bath and it looked about right.  There is still some consideration to happen around this subject. 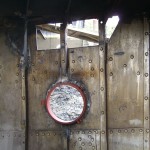 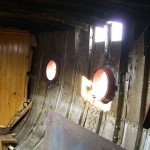 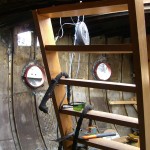 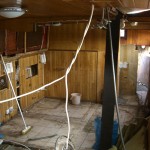 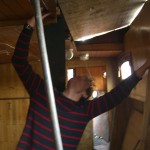 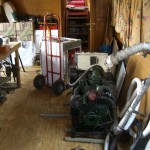 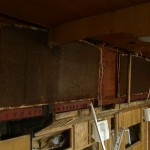 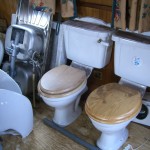 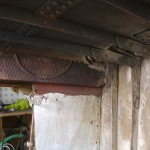 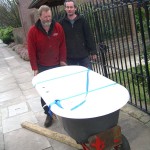 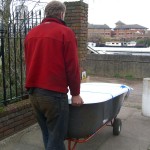 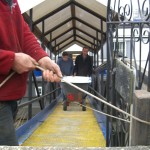 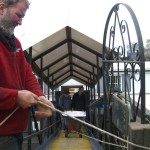 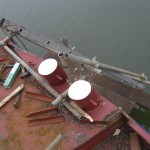 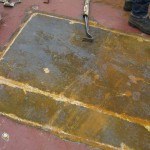 It’s arrived and it’s got enormous feet!  Bigger than my own feet!  Yesterday at 3pm I hot-trotted over to the vessel to find a delivery van and a perplexed Tom staring into the back of it.  To the rescue I came, ready to haul the damned thing off the back of the van.  I wasn’t much use, but my intention was good.  The man who drove the van didn’t have many brain cells and was unwilling to help us get it off the back- he watched as Tom and Stuart slowly wiggled it on to the tail-lift and then on to the ground.  There are some curtain twitching neighbours who seem to be on everyone in the marine’s case and find any excuse to grumble at us.  They, and the unhelpful truck driver should all be together and make a community.  Anyway, the van man was no help at all.  Luckily Stuart and Tom were very handy with the sack barrel and ropes and managed to make a sort of rolling platform for it.  I think Tom and Stuart like building things to move other things on.  Every time I pop over Stuart’s invented another contraption that he’s put on to the side of the boat.  Actually it’s quite good because they are safe and it’s better to be safe then in the river.

So back to the bath!  It is double-ended, very luxurious and every night will be like the flake advert in our boat.  And it comes with taps and a shower and a shower curtain rail- which is very pretty.  I like the taps but I fear they are modern and therefore a bit tacksy.  Tom assures me that the bath is definitely NOT ﻿Victorian, which is a bit annoying.  I think the feet are though- they’re clunky and not at all ornate.  Which is how I like them. But overall the bath is large and my worry now is that it will look silly in the bedroom.  In fact, the stove is also large so we are returning it and getting a smaller one called Wendy.  So far we have bought some very over-sized things which may become problematic. But it is nice though.

The other thing that concerns me is that everywhere I look there’s some ‘flea-market style’ or ‘boho chic’ nonsense book about interior decorating.  What I don’t like is that they try too hard and I don’t want to end up with a trying too hard boat interior.  So I need to watch that.  Especially because the things I like will end up falling into some ‘recycling antique rustic colourful materials half ebay half random furniture ‘ sort of style.  But then I guess that’s not really much of a snappy category… so maybe we’ll be alright. 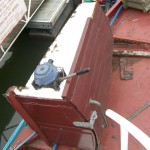 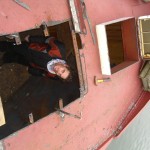 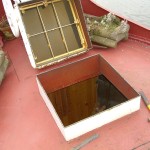 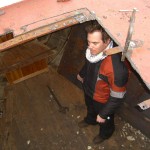 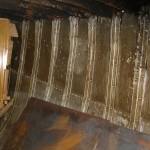 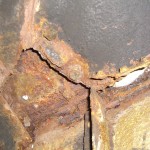 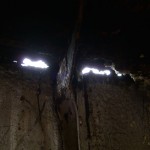 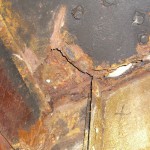 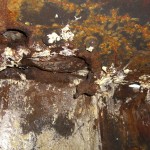 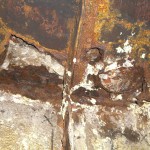 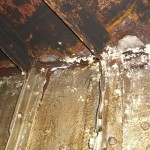 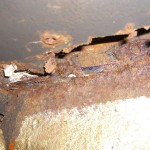 It’s been nearly two weeks since I last wrote. Lots has happened but I have been totally distracted by work (blurgh). Actually some of the work has been very nice so I shouldn’t complain at all.  SO, I have taken pics which I will upload but for now it’s just these humble words…  Mainly, the concern of the past few weeks has been with the bedroom space which we are converting and the boiler.

HOLES:  We discovered some grotty holes in the front of the boat (the bow).  Well, actually, Stuart the welder discovered them so he is doing some work to repair them.  This is structurally quite important because the front of the boat gets bashed about quite a lot when it’s on the move, so it needs to be done properly.  Also, you can see where previous repairs have been made and there’s layers of weird work that has happened before.

ROOF HOLES: We have cut off the external ‘hatch’ on the roof of the front cabin (“the bow quarters”) and are going to weld some steel over that.  Next to it there is what once was a skylight, but it was a bit crappy and plastic so we are making a new one.  There will then be a skylight  above our bed so we can look at the sky.  If it ever appears from behind the clouds.

PORTHOLES: We ordered 4 and they have arrived and are going to be welded into the bedroom.  There have been tense conversations about what size these portholes should be and how far apart they should be positioned.  This has been resolved.

BATH:  We won one on ebay and it is Victorian and made of cast iron and it has feet.  It is in somewhere called Leyland which is not a place I had heard of before.  Now we need to work out if it is in this country and how we should go about collecting it.

BOILER:  We won this on ebay too and it is an old Worcester Bosch.  I never wrote about the kabola properly.  But the general gist is that it was a good one to go for as it is designed to run on deisel and be sea-faring, but very expensive.  The Worcester Bosch boilers have recently changed and the one we bought was brand new but second hand, an older model which would run on deisel.  This is annoying because I have forgotten actually all the details of what it was about…

GENERAL OTHER STUFF:  I am getting a bit restless about the whole thing and now that the sun is starting to shine, I want to get in there and get painting and going. But it’s still slow and every day there is some new thing which we need to do differently and the process feels delayed.  Also I am generally a bit grouchy for other reasons that are unclear to me.

THE REST OF THE BOAT:  Tom has knocked through all the other walls and it is now completely open-plan which is great but obviously we can’t keep it completely ope-plan as we need a toilet and shower and stuff like that.  Also, the floor is back on the top of the boat so we just need to get those pesky floorboards sorted.

Despite the cheery picture I uploaded yesterday (which did make me laugh a lot because it does actually look like us), I have woken up feeling ever so anxious.  Last night I did some working out of accounts and what’s been spent and worked out that we have already spent over what was quoted for this first stage.  A third over the quote.  Which is quite a lot, and suddenly I’ve got the FEAR.  Anyway, Pat and I have decided we need to discuss details with Tom.  I am being ridiculously meticulous about the amount we are spending and putting everything into folders and making endless spreadsheets, like some sort of lunatic.  I’m probably panicking, but I do worry about that sort of thing.  Also we looked up the boiler that Tom wants us to get and it costs almost £4,000!  Just the boiler.  So we’re not sure we’ll be able to do that.  Anyway, I will do an entry about Kabolas: ‘to Kabola or not to Kabola’.  (They are very serious marine boilers for trawlers and yachts that rich people own and fishing boats which people live on in the antarctic). It’s not so much that I’m worried we’ll run out (there is that) but that I genuinely don’t think we should spend over what we’ve got because it would be silly.  As I was saying yesterday.  It’s the old thing of pouring your money into a big hole.  And that’s quite literal at the moment what with all the holes we’re making. 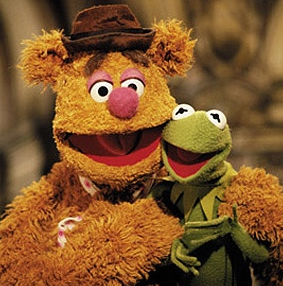