I popped by to do some small things that needed doing and it’s been raining a lot so a bit leaked into the boat where the chalet (also known as the hump) was cut off.  Have I ever mentioned the chalet/hump?  Maybe… Well anyway, it was a steel hump on the boat (you can see it on the pictures) so that you could get over it in the days when it was a conference boat.  We decided to cut it off as this would also be a good way to get the new tanks into the boat without having to cut a hole out the side windows.

Anyway it feels very rainy in London, and the sun is trying to get out, but not really succeeding.  So I walked over to the boat and when I got there I felt lazy and looking round at the general mess and state of it all made me a bit defeated.  I know it will get there eventually, just feels like a long way away today!  Hmmm… then I tried to get some more water out of the bit where the water lives (between the hull and the re-plating) and instead I think I hoovered out a load of waxoyl that Pat had put in- so I’m not sure my effort was very successful!

It’s very windy today so the boat was moving quite a lot and because there are no tanks in the bottom (all the diesel drums are on the roof) it feels very light.  I love the movement of it- I wouldn’t want it all the time as I might get sea-sick, but as the boat is only entirely out of the water for a few hours a day it’s kind of special when you feel it.  I imagine lying in bed with the skylight above me, the little stove going in the bedroom, the boat swaying away.  Pat will be outside making something, like a floating platforms for birds.  And I will be reading a book, and there will be lanterns and the smell of wood smoke and cups of tea and red wine when it gets dark.  And then friends will come and we’ll all sit in the kitchen around the wooden table and look at the reflections of the lights on the water.  That will be good.

It’s a weekend off, so I feel detached from the general excitement of the boat. Tom the boat fitter is starting on Monday, putting in the piping and bits for the new tanks.  The tanks are due to arrive next week I think.  He’ll then be pretty much working on it full time for a few months (yikes).  We want to use old scaffolding boards as floor boards throughout the boat and have got a kind friend-of-a-friend who owns a construction company to give us some for free- he’s insisted. Then the joinery next to our old boat is going to help us plane them- this can be tricky because old boards may have bits of old nail and stuff in them so they can damage a planer.  Gerry at the yard has agreed to use old blades though and if they still prove difficult we may have to reconsider.  Then there’s the aesthetic question- it could look really nice with the big chunky floorboards- but it might look rubbish.  I’ve decided I’m very boring today- my writing is thoroughly uninspired.

The general theme of this blog is ‘doing up the good ship seahorse with not very much money and a bit of time now that I’m “freelance”‘.   In January 2010 we acquired the handsome dutch barge named Seahorse, after selling the much loved Pennie, moored in Southall.  The new boat is on the Thames and has beautiful views.  It was a big stressful thing, we had started looking at bigger boats in June 2009 and saw many we didn’t like, one we loved but couldn’t afford and then Seahorse- which we kind of loved but which smelt weird and had very bad curtains.  We put in an offer and it was accepted and then we had to deal with the separate issue of the mooring and securing that. Oh, and then of course we had to sell our old boat and get a ‘marine mortgage’ for the new one which involved lots of form filling, a lovely broker who helped us a lot (www.londontideway.com) and a nice long chat with the owner of the finance company about how we (me and Pat, not me and the man on the phone) would one day sail to france (but that’s a long story).

The major part of the sale process was having the survey done.  This happened in late November and was expensive and eye-opening.  The first major discovery was that the tanks underneath the main living space were horribly rotten and rusty.  So there was water leaking down into the bilges (that’s the bottom of the boat (the hull) on the inside).  And of course this is a terrible thing for a boat.  And it’s also nasty because the leaking stuff can be water, black water, diesel and all of that gets mixed with rust and makes this beautiful orange coloured goo- which you can see pictures of in earlier posts.

So the revival process was going to be a bit like saving a big rusting hulk from extinction (PHASE ONE!).  And the first phase would have to be getting the tanks out, cleaning the horrid bilge and painting over it with rust converter.  But the good news from the survey was that the hull itself had been completely re-plated and needed no work doing to it (that can cost a lot of money- thousands of pounds).  So the tanks was the biggest problem, and as well as that the boat itself needed a lot of structural work done to make the living areas work better.  For this we enlisted the help of talented ‘design-space-living-guru’ Nick Radclyffe (also my dad) and a highly recommended boat fitter called Tom.  So that would be PHASE TWO! and then the final bit would be making it look nice – PHASE THREE!- which is too far away to even imagine and will probably involve Pat and I spending every waking moment sanding and painting and trying to convince our friends to help.  And there will probably be a whole lot more phases in between.  I”m going to add a page called ‘What we’re doing’ to this blog and then you can see the bigger picture. And I can stop writing now.

I am stunned to find out that a few people are actually reading this!  SO. This weekend I obtained some feedback on the blog and the consensus was that I needed to include MORE information on the overall process of what we are doing and what it’s all about.  Jonny Pollard suggested that more in-depth analysis of the processes and the challenges/decisions etc was needed at each stage.  I have therefore decided to include more information on the ‘about’ page.  And I’m adding a post to follow this one which re-caps the general idea.  Also, more video content was recommended.  (At the moment there is none).

I present to you… A clean and painted bilge! BEFORE… and after. 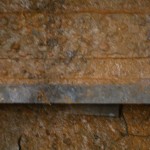 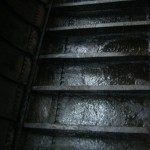 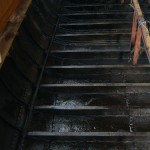