All the trips we do, on the big, medium and small boats.

A neighbour who lives on land recently expressed her sympathy at me about how hard it must have been to be living on a boat during this COVID fun-time.  I’m not going to lie and say that COVID has been fine, it hasn’t, but this is nothing to do with being on a boat.  In fact the boat, and the water and our community are the few things that have stayed constant and made me feel grounded during this shit-show of a year.

This neighbour hasn’t ever even been on the boat and it bugged me that she felt she should share her condolences when I had never expressed any problem with our being short of space on a boat.  I think sometimes people assume you live on a boat because you can’t do better.  She seemed so concerned she even TOUCHED my arm. In the middle of a pandemic!  Her eyes said- ‘I’m sorry for you being all squished up inside that dirty floating metal thing’.  Poor us!  With our grubby little hands and feet all covered in coal and oil and our lack of hot water to wash with and not even having a toilet and only being able to pee overboard when it’s high tide.

Ho ho… if only! This middle-class boat life has its moments, but on the whole we are bona-fide, living-the-dream-spoilt.

Lockdown number 1 was like a cheery little dream, all impromptu canoe trips, shipwrecks, sunshine and not enough work on to keep us from exploring the river.  We set out on the big banana (our canoe) most afternoons and found secret waterways off the main river that we never even knew existed.  We saw the resident seal many times and once so close that I got a proper look at his face.  Such a big face he had- I hadn’t ever really been so close to the face of an animal that wasn’t a dog or a tortoise ever before. (I’m not a cat person).  He looked right back at me, with eyes that said – come any closer and you might regret it.  I almost shrieked with excitement.  I think I did shriek with excitement.  The seal didn’t like that and slunk away under the water, re-emerging by the shore to an expectant crowd of onlookers.  It then rolled itself out of the river, sideways, (like in action films when people jump off moving vehicles but much slower) and came to a stop, finding itself the perfect spot for basking in and being adored from. The two local seals came to be a big feature of lockdown 1 and all of us on the mooring would share seal spots and come running up onto deck whenever one was seen.

One afternoon we headed off down river and found a secret pathway which got narrower and narrower until the big yellow banana was almost grounded out and we were using our paddles to push the earth, rather than the water, away.  We got stuck a bit and had to reverse out, which  was awkward but then very excitingly, the water started jumping a lot and the canoe even started to wobble, and this time my daughter shrieked as she didn’t like it and thought it might be shark, which of course it wasn’t.  The canoe was surrounded by all these very lively big fish swimming about like crazy, crashing into each other as though they were in that ikea marketplace.  We got a good look and later identified the fish- apparently they were bream! And they were all wriggling like that because they were mating, or spawning or however it works.  We sat in our canoe for a while watching them, mesmerised, as they bumped us about in a frenzy.  Well, I did.  I think Nina was squawking a lot about wanting to go home.

All things considered, during the first lockdown I noticed that the thing about living on a boat is that you do have less space, but you also have all the space- right there around you. And when the sun comes out the river opens out for you… all those horizons and all the light. Dammit, that’s good!

We had another run-in with the RNLI who have become our personal rescue service these days.  They should re-brand with the slogan ‘Towing Seahorse Most Weeks’.  We could make them a film and everything to promote it.  Our short trip to Eel Pie Island was over before it even started as the engine failed as soon as we had untied all the ropes.  We were then left dithering sideways mid-river while the tide pushed us towards towards Kew Bridge.

I was watching Pat as it happened and he said:  ‘Why aren’t you moving faster?’ (To the accelerator stick with the bobble on top that I am a bit afraid of’).  And then he said ‘Fuck’ as the engine sort of died.  Then he stuck his head out of the window of the wheelhouse at Louis who was helping us with the journey and said ‘Fuck’ at him, as though it was a command.  Then he ordered me downstairs with the kids, to be honest I had already decided that would be the best place for us.  Sammy had no idea what was going on and was happily chewing on his bottle.  Nina said ‘Oh.  But I want to go to Eel Pie Island’. And then ‘I’m hungry’.  And finally ‘ I’m going to put my rollerskates on’.  Perfect footwear for the situation.

I do believe I kept my cool as the boat drifted.  I ran up and down the stairs a few times, looked about, told Nina to keep Sammy still and got my phone from the bedroom.  I took a picture and put it on Instagram and then I asked Pat if I should call someone meaningful.  Pat meanwhile had put the anchor down and called the coastguard saying PAM PAM Seahorse a few times.  (I love PAM PAM!  How exciting- I might start all my conversations with PAM PAM, makes everything sound more energetic. PAM PAM Simone here.)

Even though we had put the anchor down the boat was still drifting and that was alarming.  Happily, we were drifting through the central arch of the bridge which is better than into it.

SO to cut a not very exciting rest of story short, the RNLI appeared, saved the day and towed us back 10 metres to our mooring.  We nearly squashed a few rowers.  FUN TIMES.  So we were back where we first began a few hours later and a bit paler.  Pat was particularly pale and I felt a bit sad for him as he had been very excited about the little trip and the independence of it all.  Just ‘popping’ to eel pie island to have the boat re-painted.  It takes a lot to ruffle the fur on that old sea dog. Well, he’s more a barge dog really.  Yes.  Disappointing but not too disastrous.

I’m sorry to say that the big trip we did in May this year to Chatham went undocumented as it was all a BIG SUCCESS and we made it there and back in one piece having had the most perfect sunshiny weather all the way through and a lot of beautiful stretches of cruising along.  We had NO fires and NO problems and we were practically in the sea. We joined as part of the DBA rally, which was funny in lots of ways.  The DBA are a bit of a prehistoric organisation and resistant to change so we were one of the few young families (apart from our neighbours who came along for the ride on our boat) to join in the trip.  A lot of the boats are newer than ours and very tidy indeed.  The demographic is mainly older retired couples doing trips around the norfolk broads.  All very n i c e.  Not hugely (erherm) diverse.

Anyway.  We had a great time and put the kids in a wash tub on the roof of the boat which Pat had used on a shoot he did for Virgin Money.. ha ha.  The wash tub contained them and also amused them.

Thinking back on this voyage it is really miraculous that it all went so smoothly and actually it was totally entirely magical.  I drove (steered, really…I was a bit scared of the accelerator stick) the last part of the journey coming in to Chatham as the sun went down. 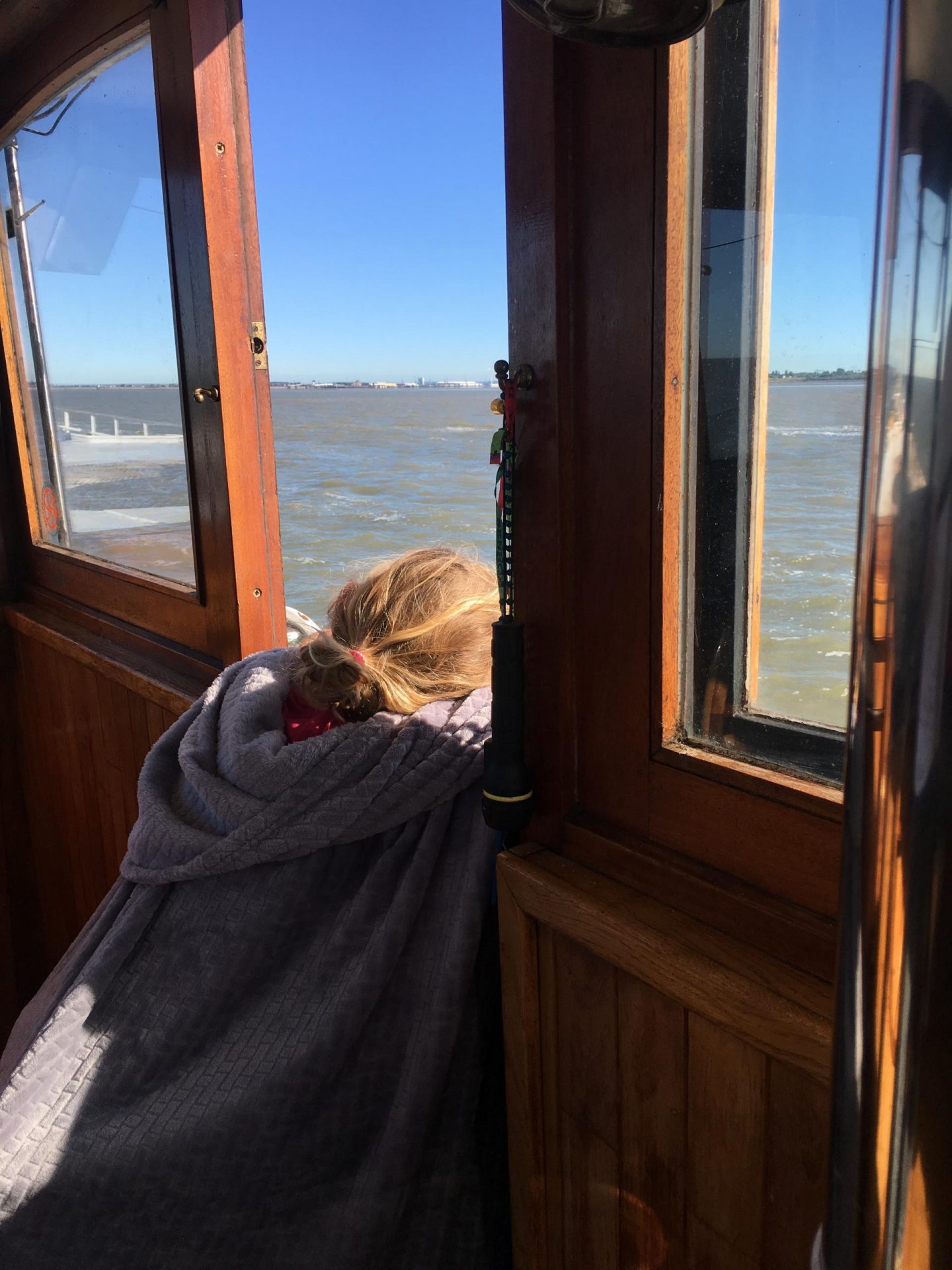 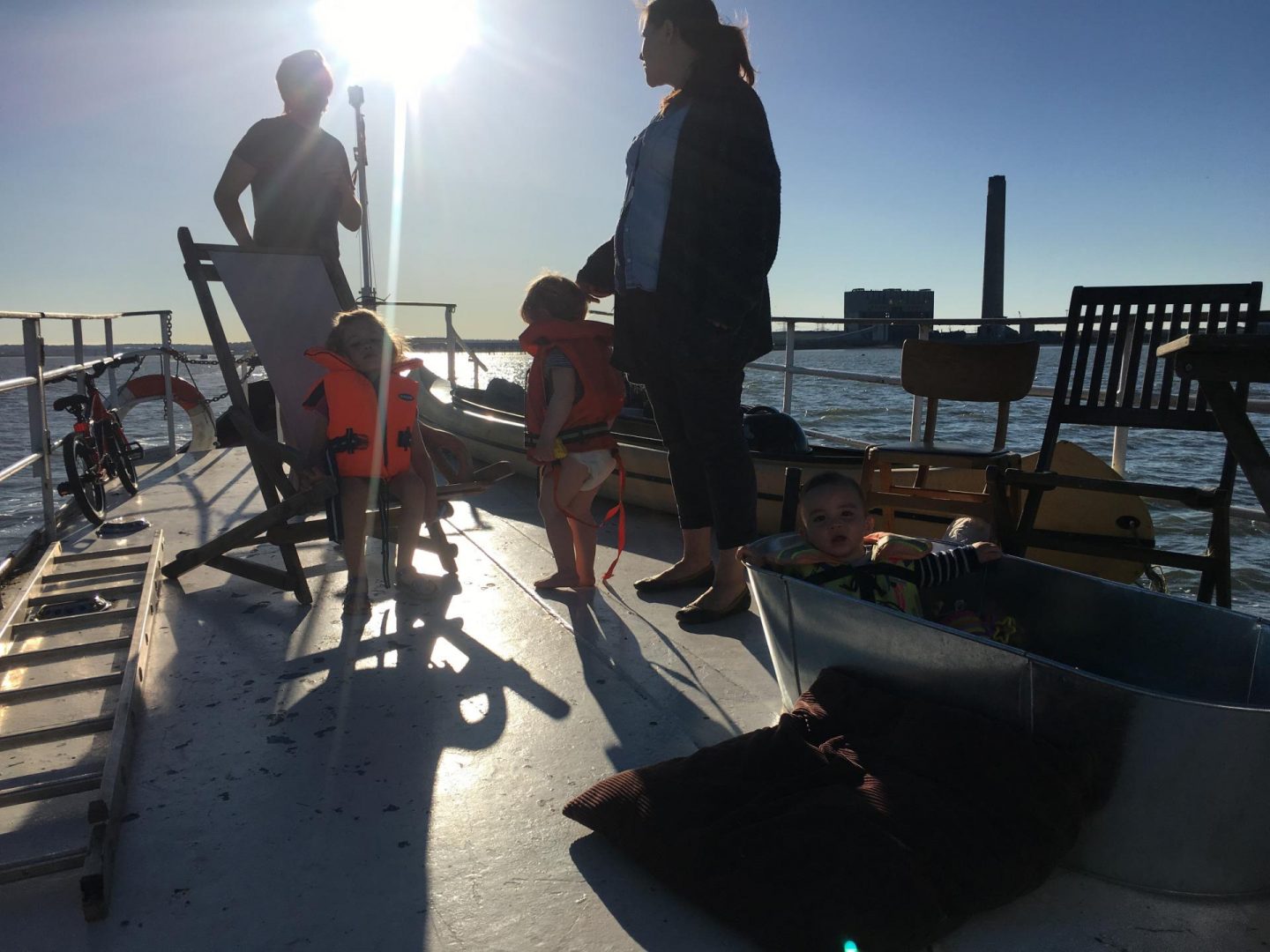 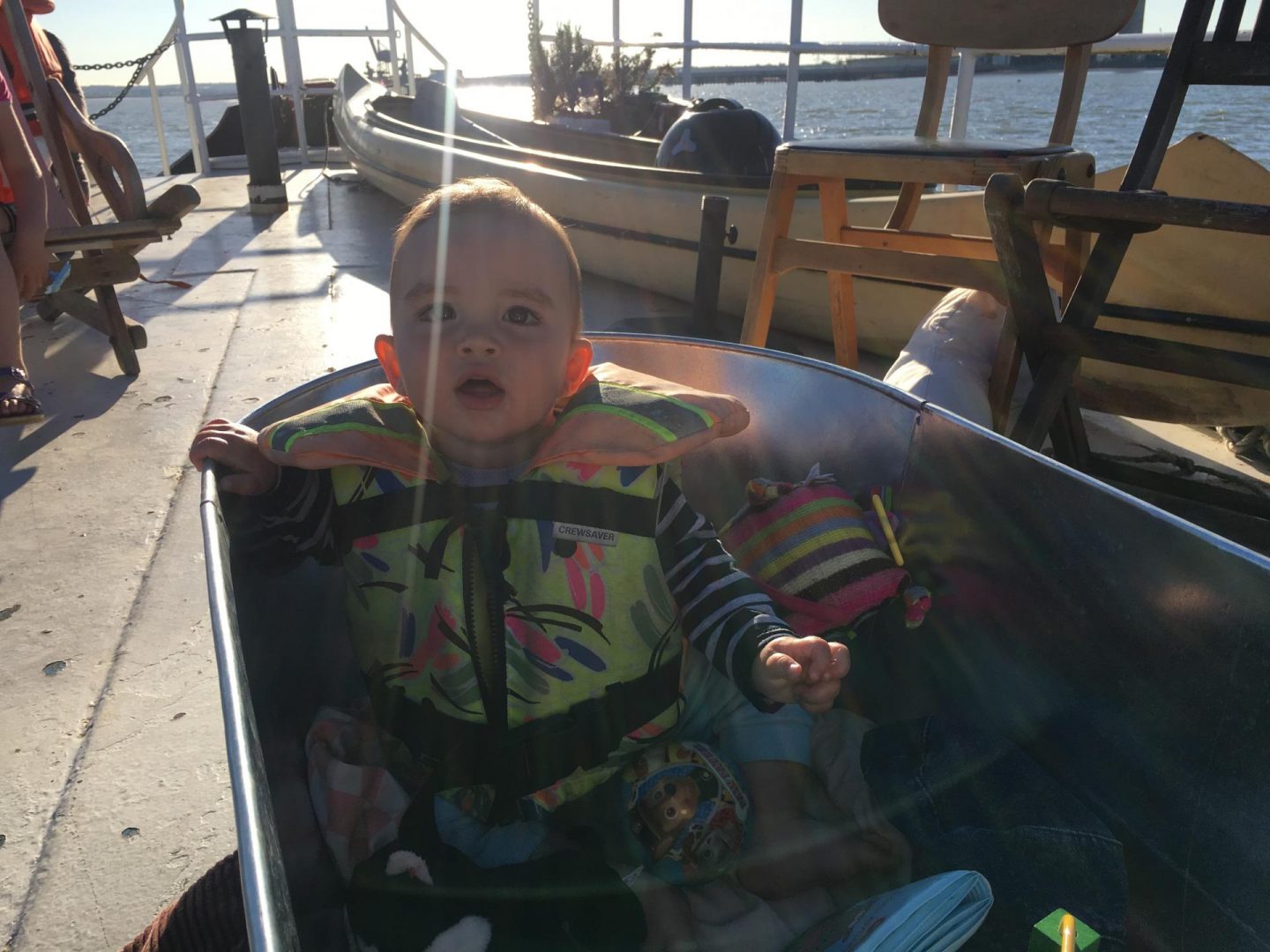 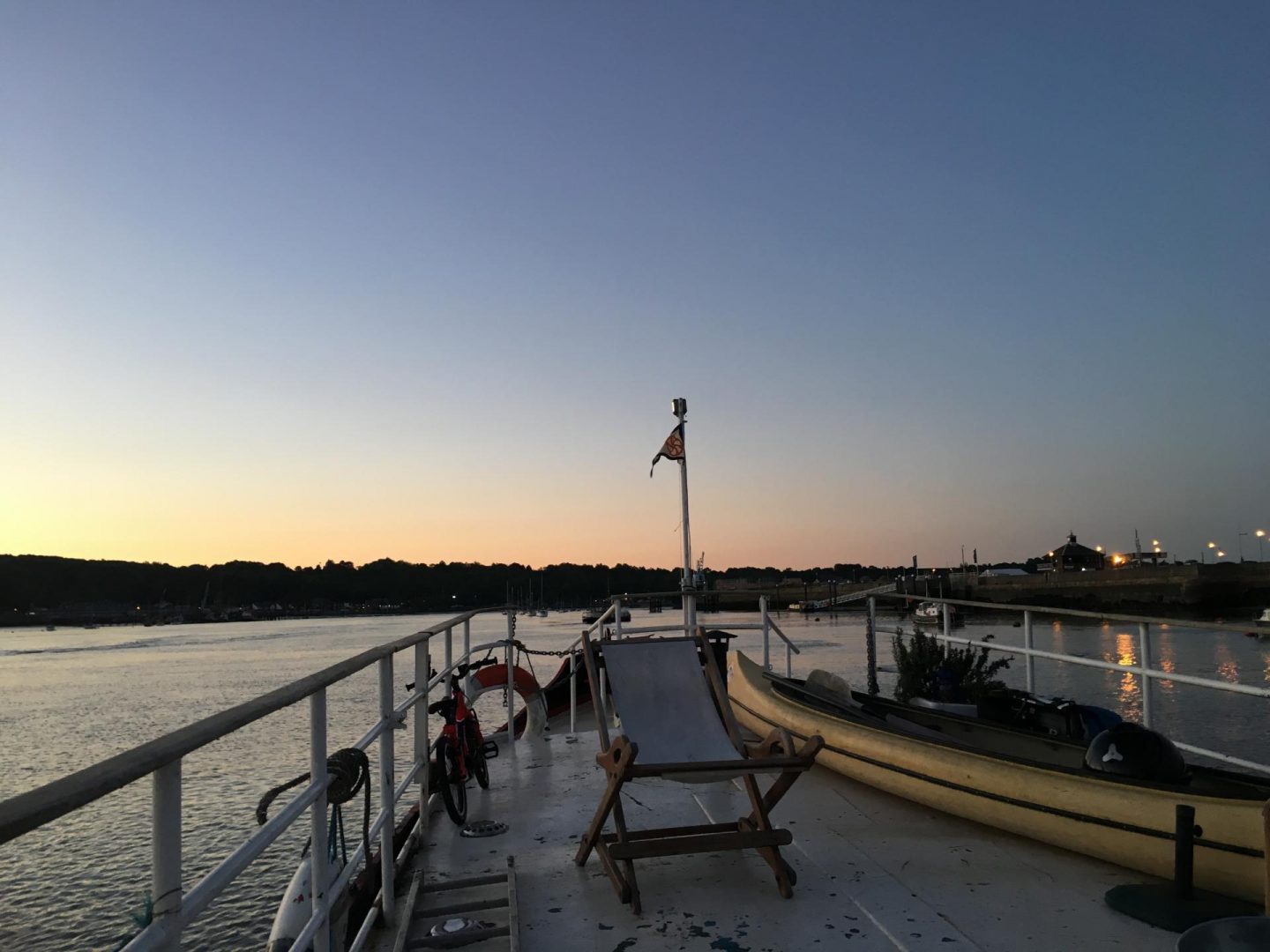 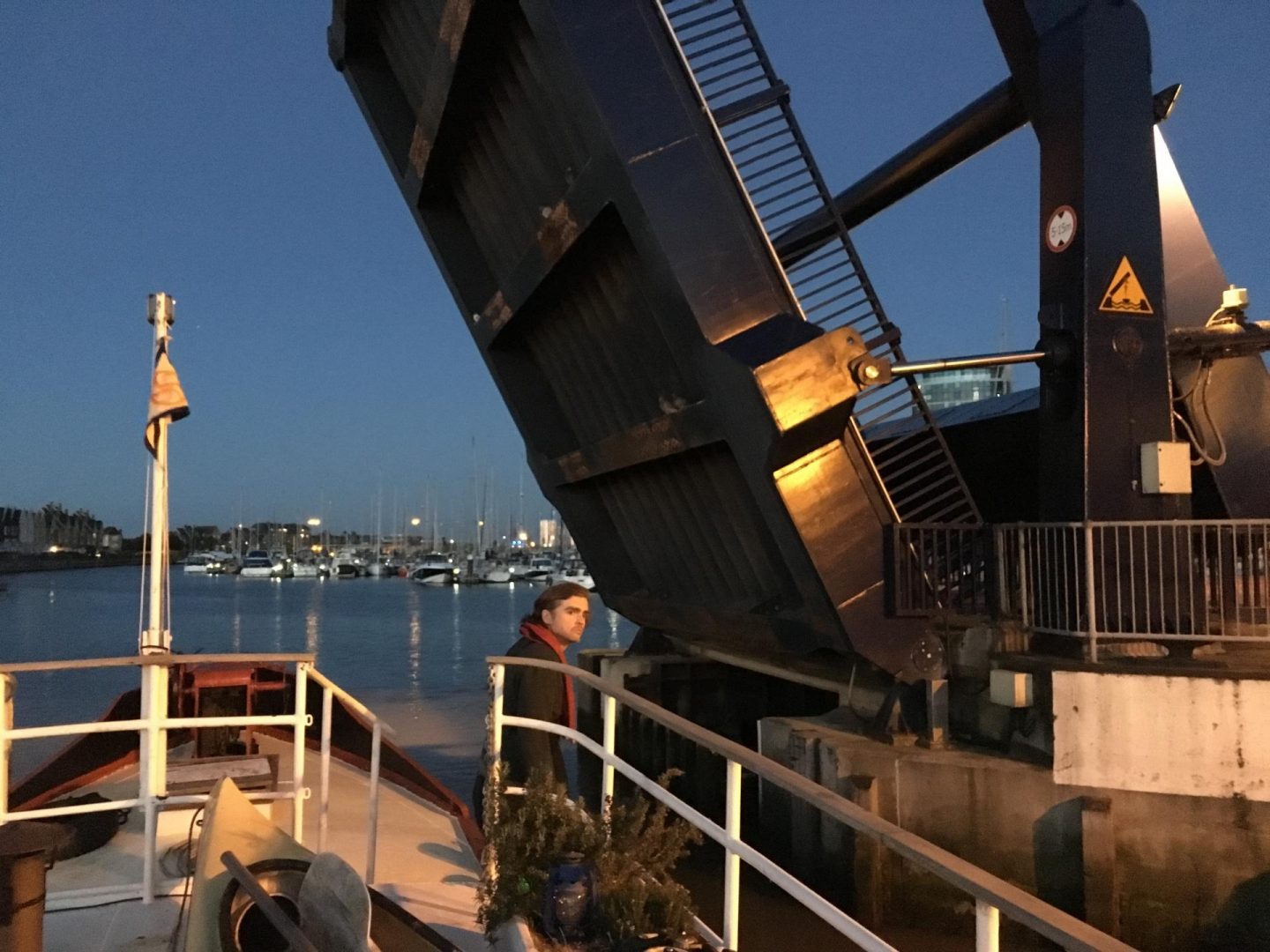 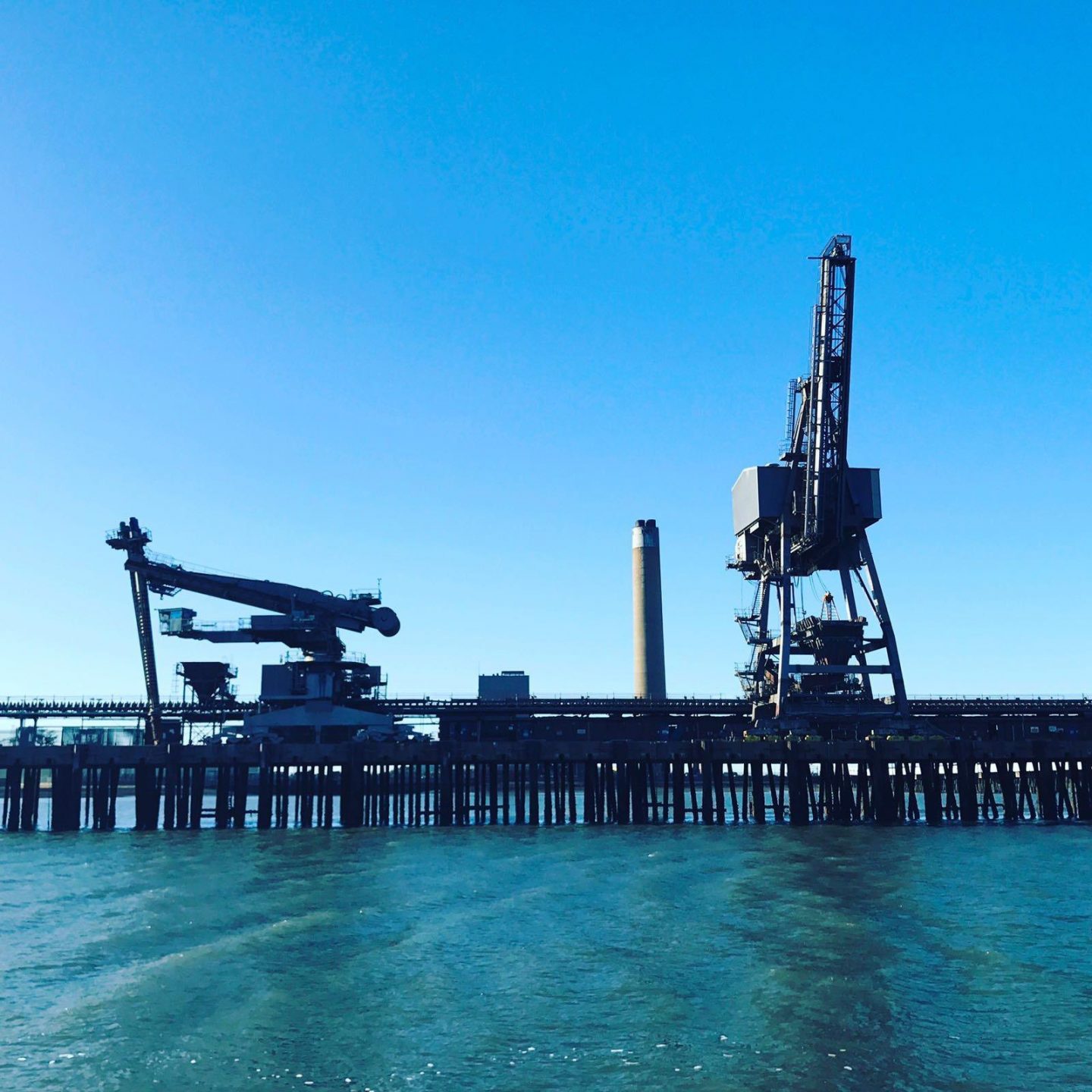 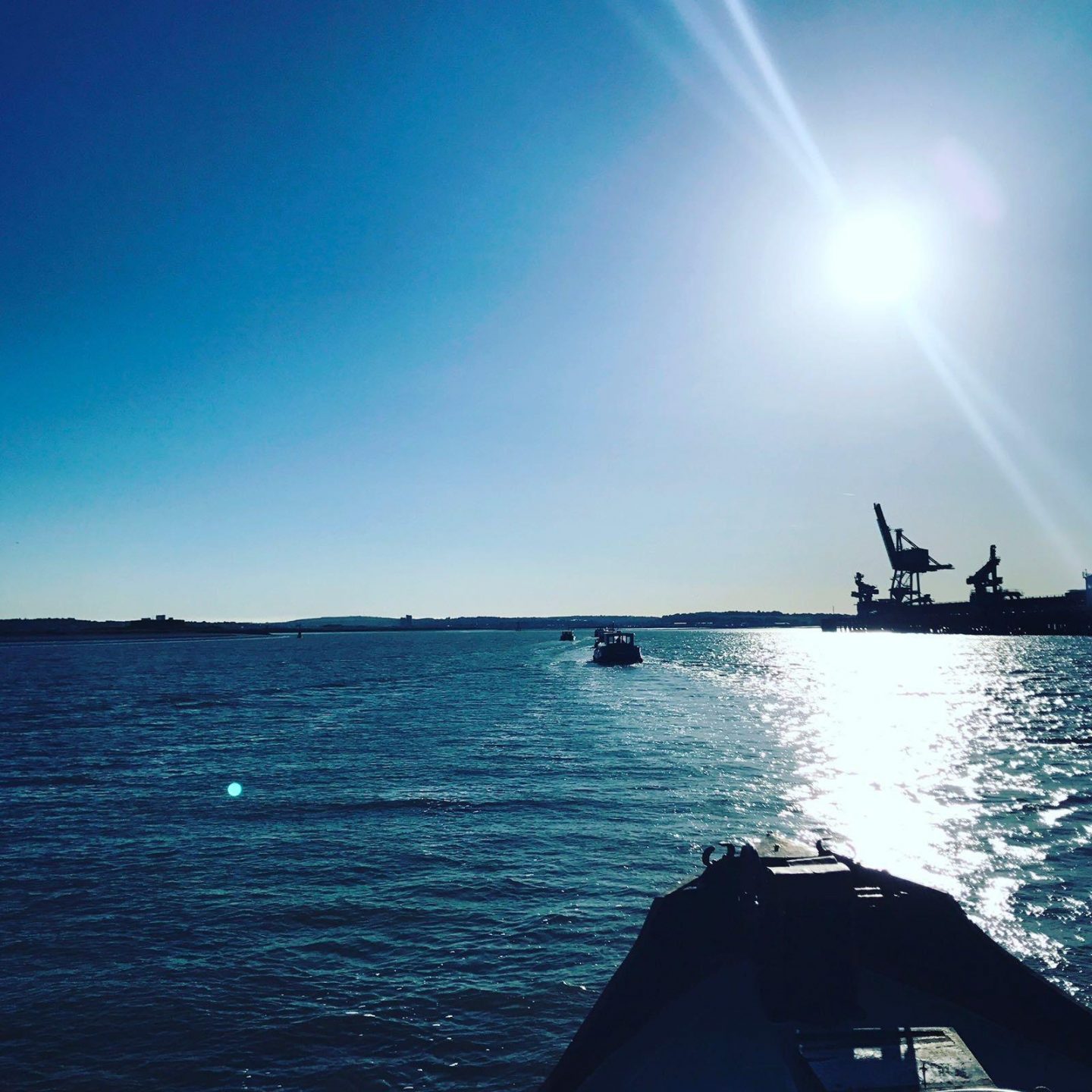 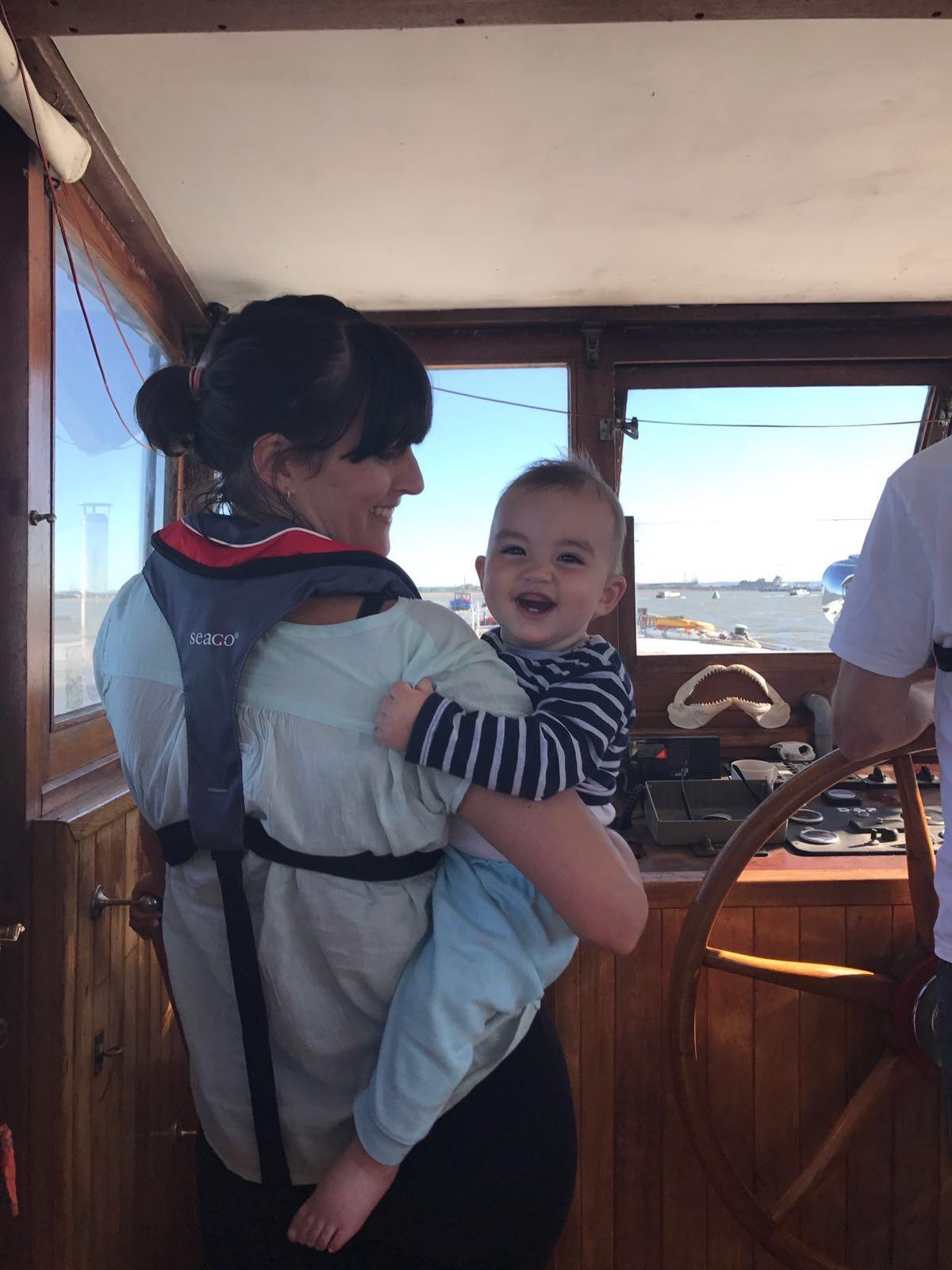 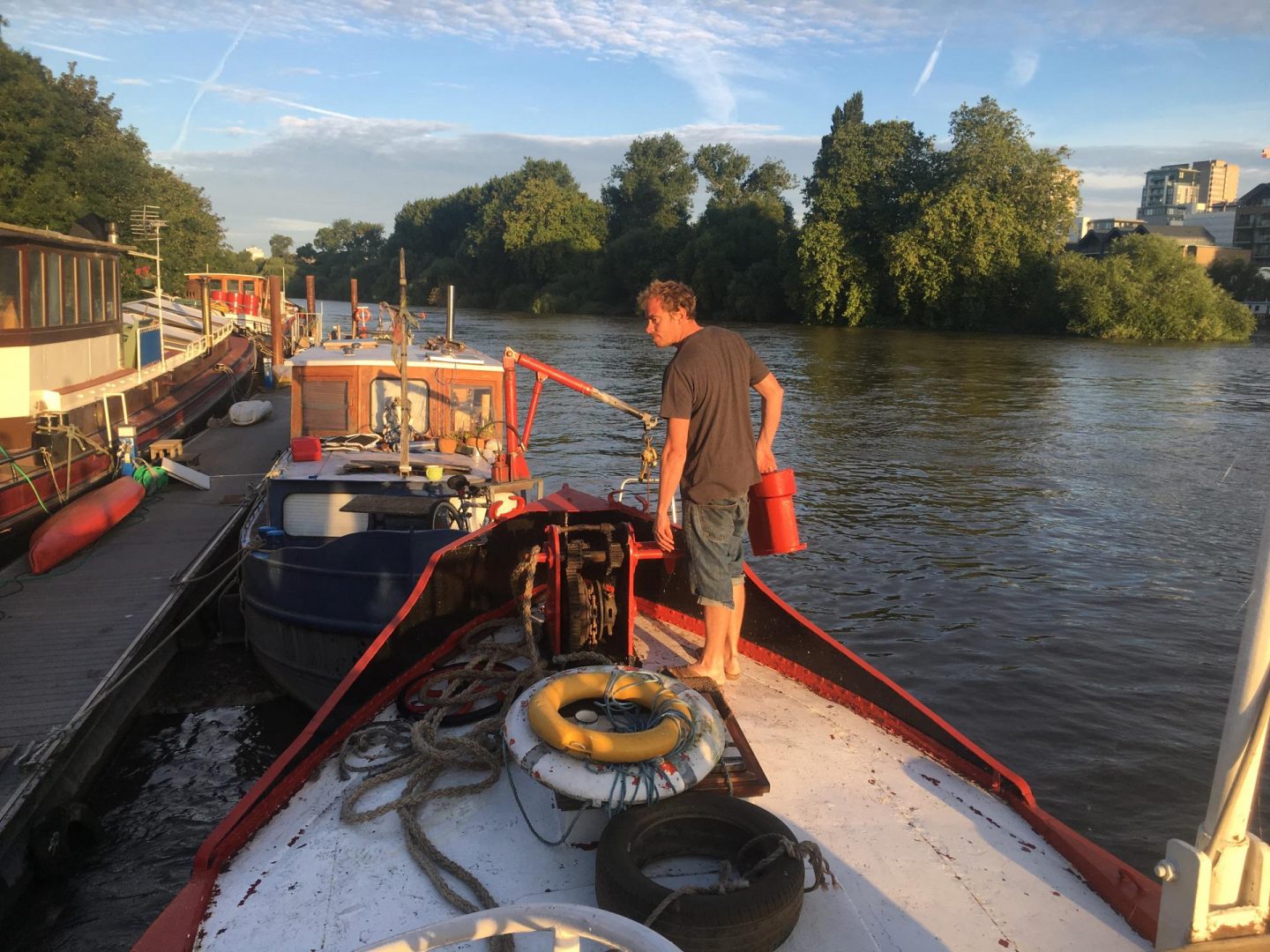 I was awoken to the gentle sound of 100 year old anchor being winched up somewhere near my head. This noise then followed by a short pause and then sound of giant chain unraveling rapidly.  So, I thought, it’s the big day! Adrenalin will kick in and I will be ready to face the challenges. Pat is already wondering about black faced and panting from various high-energy activities including the anchor and also pulling down the mast. It’s an incredibly beautiful morning.